As 2017 begins, agencies and brands are looking to key trend measurements. The fourth annual Key Digital Trends report for 2017 has been released, all thanks to two of Ogilvy’s digital and innovation leaders, Marshall Manson, CEO at Ogilvy PR, and James Whatley, Planning Partner – Innovation at Ogilvy & Mather London.

The report is divided into two sections: as usual it first reviews how last year’s predictions fared with actuality – and that with no big surprise wasn’t very accurate – given a few major political surprises such as Brexit or the election of Donald Trump. The team also admitted a couple of false predictions with respect to the relevance of “Millenials”.  Ogilvy did better on a few other areas – such as the continuing rise of video content, the erosion of Twitter (which it indeed added again as prediction this year) and the rise of influencer agencies.

The second part offers Ogilvy’s thoughts about what the industry should be thinking about in 2017. In essence that comes down to 5 key trends: 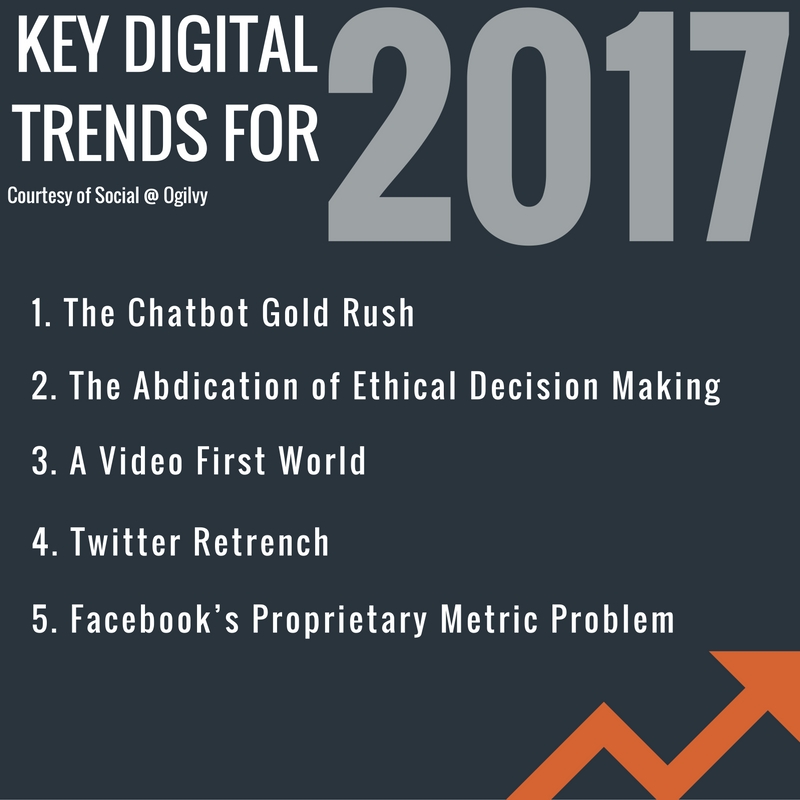 The team predicts a further increase in the use and relevance of chatbots in particular in marketing and branding – most so on Facebook messenger and Whatsapp.

The second trend is a pretty extreme one – as the team basically predicts a decline in ethical decision making as more and more daily tasks are taken over by machines and robots (such as re-stocking your fridge, or driving your car). This trend driven by technological advances implies not only automating certain processes but indeed handing over choices over what is right and wrong – which obviously has major implications for the ethics of decision making.

As indicated in the earlier paragraphs, Ogilvy predicts the video trend to continue at the current pace. But actually they admit we don’t really talk about simple videos anymore – as we are in reality wittnessing the collapse of traditional video formats.

The team forecasts the rough times to continue for Twitter. Failing to find a buyer for its platform in 2016, the company has to face a further decrease in relevance, especially when compared to major competitors, and a weak position in the market for “live”.

Last but not least Ogilvy highlights a trend that affects Facebook more than others – which is a data accuracy problem. It is really hard to measure your reach and campaign effectiveness on Facebook because of data limitations and – even worse – Facebook metrics miscalculations. These problems aren’t easy to solve and will be around for a while (maybe implying some hope for Twitter – LOL).

Anyway, it is really worth taking a full look at the report yourself, especially as it does provide a section for every trend on how to best prepare your company. So head over to: