“This is a place where we can have real conversations about the most important issues facing our country – a place where you can hear directly from me, and share your own thoughts and stories.”

A study by by strategic communications and global public relations firm Burson-Marsteller, now gives evidence to just how important Facebook has become for governments communication strategies. The 590 Facebook pages analyzed in their study represent 169 governments and have a combined total of 311 million followers as of February 1, 2017. In 2016, they published a total of 392,281 posts which have garnered 755 million interactions (comments, likes and shares).

A significant part of Donald Trump’s electoral success in 2016 can indeed be traced back to his focus on communicating via social media. And as this study shows: since his inauguration, he has become the second most popular world leader on Facebook with 20 million followers, half as many as Indian Prime Minister Narendra Modi who has close to 40 million followers.

The study produces a few more insights, worth highlighting:

A couple of interesting statistics: 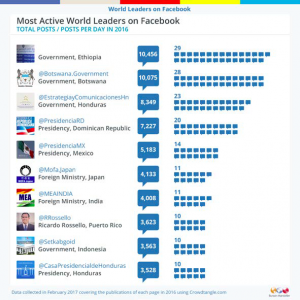 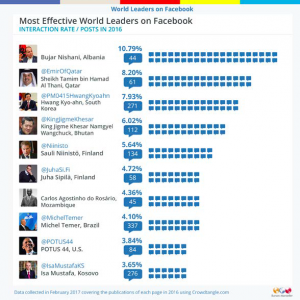 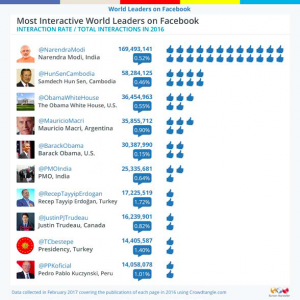 You can read more results in the full study here: